This past November, upon the release of “The Twilight Saga: New Moon” fans of the series found a great surprise in many movie theater lobbies, a poster for “The Twilight Saga: Eclipse” with a release date of June 30th, 2010.  That was less than eight months away!  While the wait may have seemed eternal, one of the themes in the movies, Eclipse has finally arrived.

The movie continues the story of one of the most bizarre love triangles imagined.  Bella (Kristen Stewart) is in love with Edward (Robert Pattinson) the vampire.  Jacob (Taylor Lautner) the werewolf is in love with Bella.  Edward loves Bella, and Bella has feelings for Jacob too.  Bella wants Edward to make her a vampire, which Edward is reluctant to do.  Jacob is even less thrilled with the idea of Edward turning Bella.

Meanwhile, in Seattle, someone is creating an army of new vampires.  This army are slaughtering many people, and turning the rest of into new born vamps.  The army’s next stop; Forks, Washington, and guess who they are after?  With the new threat to Bella’s life, an unheard of pact is made as the Cullen family of vampires agrees to team up with The Wolf Pack to fight the impending war that is about to happen. 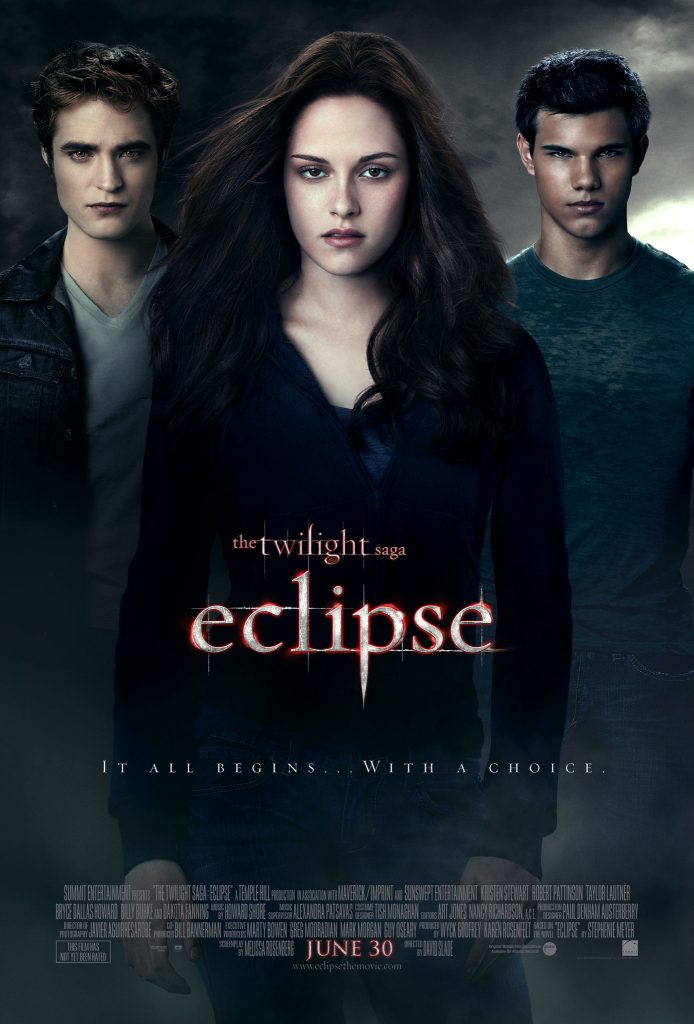 The Twilight movies HAVE gotten better with each new entry; but, not by leaps and bounds.  Just a little but better.  Eclipse is the best of the movie franchise so far, just barely.

Kristen Stewart often finds herself in the crosshairs of critics for her performance in the Twilight movies.  If anyone had seen the movies “The Runaways” or “The Yellow Handkerchief” they would know that Ms. Stewart does possess some solid acting abilities.  The problem is with the character of Bella, who continues to be one of the weakest and dumbest characters to ever grace the silver screen.

Despite every warning she gets, including from her true love Edward, she still insists being made into a vampire.  In this new movie she is given one great reason after another why this is the wrong decision, in many different forms, yet she ignores them all.  Her mother tells her how she looks forward to the day she gives her grandchildren, Bella just politely smiles at her.  One of the best warnings she gets is from Rosalie, part of the Cullen family.  In New Moon when the family votes on whether Bella should become a vampire, Rosalie votes against it by saying, “I wouldn’t wish this on anybody”.  In the new movies, she keeps telling Bella, “You are making the wrong decision.  We all never had a choice, you do”.  When she is told how newborns blood lust is insatiable and she is likely to kill those she loves, that don’t faze her either.  Bella simply answers, “There is nothing you can say, and Edward is my life.”

One of the better moments in the films is learning the back story of some of the Cullen family and how they became vampires.  Some new facts regarding The Wolf Pact are also revealed.  These highlighted moments are too few.  The one on one scene between characters are dull, with the exception of one very good one between Edward and Jacob.  When the army of new vamps finally does fight the Cullen’s and the werewolves, you feel it could have been so much more, which is shocking considering the good job director David Slate did with another vampire movie, “30 Days of Night”.  Slade does manage to get a few laughs here and there too.

There is no doubt that Eclipse will be a monster hit this summer.  Some fans say it will be the #1 money makers of the summer season, but these are the same people who said New Moon would out gross James Cameron’s “Avatar”.  The movie is rated PG-13 for violence and is sure to sweep at next year’s MTV Movie Awards.