The Tree of Life

If you have not read my bio on my main page, let me give you some of my background here:  I went to Ithaca College where I majored in Film and graduated with a Bachelor of Science in the field.  People may think when you go to film school all you do is make movies, get lessons in screenwriting, directing and cinematography; but, it’s much more than that.  We learn film theory and have to write academic papers on the subject.  Some film students complain that after they graduate from film school they can no longer enjoy movies because all they do when they see them is break them down and tear them apart (I do that too, but I can still enjoy a movie for just the fun of it).  I do use this training to help me write my movie reviews.  Sometimes I may take things too far.  I’m probably the only movie critic who wrote about the mise-en-scène in the movie “Gamer” starring Gerald Butler.

So when it comes to watching and understanding movies, I consider myself a pretty smart guy on the topic.  When I walked out of Terrence Malick’s “The Tree of Life” I really had no idea what I just watched and I still don’t.  This review is going to have some minor spoilers in it, but I feel that even if I gave away every detail of “The Tree of Life” I would not really be spoiling anything for you. 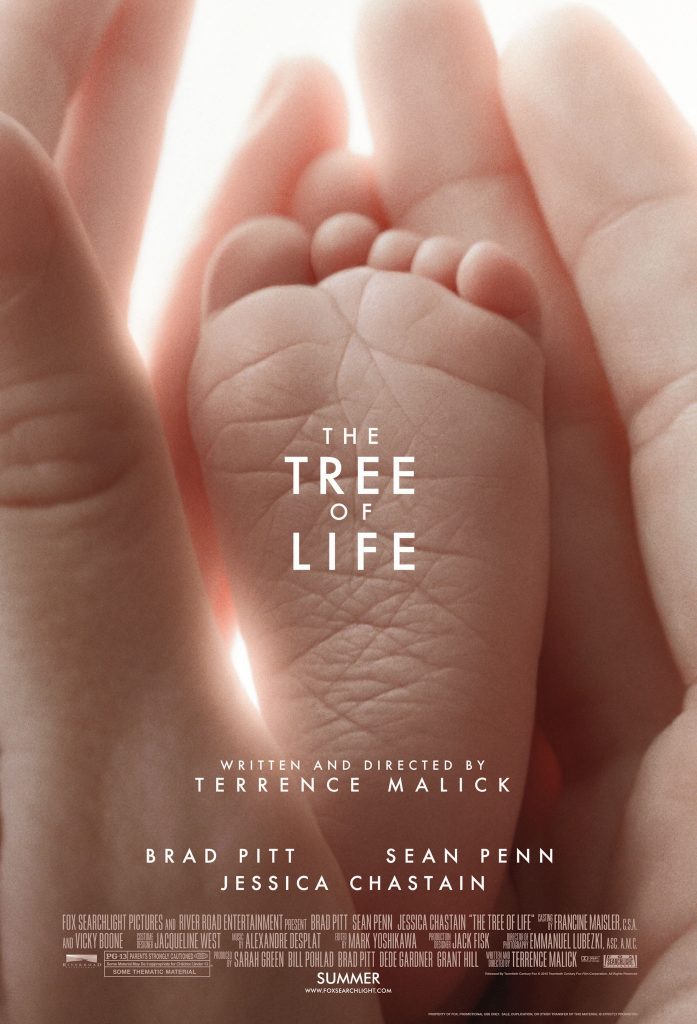 “The Tree of Life” is about… First, let me start by saying I have a tremendous amount of respect for Terrence Malick.  I think he is an amazing screenwriter and director with an amazing eye many cannot match.  I’d love the opportunity to pick his brain apart.  I already can’t wait to see his next movie, “The Burial”.  Okay, for the most part, “The Tree of Life” focuses on a family in the 1950s where Brad Pitt is the father, Mr. O’Brien, Jessica Chastain is his wife, Mrs. O’Brien and they have three sons.  Mr. O’Brien is very tough on his sons.  If this was taking place today, someone would probably call child protective services on him.  Back in that day, it may be considered more of the norm.  Despite the abuse O’Brien forces on his sons, especially Young Jack (Hunter McCracken), we can tell he still loves them.  We see the result of that upbringing when we see Jack grown up, played by Sean Penn.

The movie is all over the place, and when I write that the movie is all over the place I mean that in the most literal way possible.  Sometimes movies have flashbacks.  A flashback is a scene or scenes in a movie that take place prior to the current time frame in the story.  A recent example can be seen in “The Hangover: Part II” where the beginning of the movie opens with a phone call made by Bradley Cooper saying, “It happened again,” and then we flashback watching the whole adventure unfold until it catches up to where the phone call took place.  “The Tree of Life” has a flashback scene too.  It flashes back all the way to when The Big Bang occurred.  You really can’t flashback further than that, can you?  We then see life begin on our planet, when the dinosaurs ruled the Earth up until that one big meteor took them all out.  Eventually, the movie returns to the O’Brien family in the 1950s.

At one point, as the camera was flying through the clouds, I thought this movie would be really great to show in a D BOX theater.  For those who don’t know, D BOX are movies theaters equipped with chairs that actually move along with the movie to give the audience a whole new experience.  There is actually one such theater at the Muvico in West Palm Beach.  Terrence Malick is a master when it comes to framing a shot with a camera and the fluidity of the camera movement is nothing short of breathtaking.  The accompanying music blends perfectly with the camera work too.  Look for Emmanuel Lubezki to grab an Oscar nomination for his cinematography work.

“The Tree of Life’ has a runtime of over two hours.  There was a point where I thought to myself, when is this finally going to end!?  One of the problems is that the movie is completely joyless.  I can be accused of just “not getting” the movie.  What is the message of the movie?  I could not tell you.  Part of the beauty of movies, like any art form, is that, no matter what the viewer sees in the movie, he or she can’t be wrong.  After walking out of “The Tree of Life”, and up until right now, I still don’t know what to make of it and I saw it a month ago.  Maybe the message is that there is a big universe out there and we are just a small, insignificant part of it.  Part of me feels the ones who say they “get it” really don’t, but are too embarrassed to admit it so they say otherwise.  Who knows?  Maybe Malick had no message and just wanted to sit back and see how everyone would interpret his latest opus.  “The Tree of Life” is rated PG-13 for some thematic material.