Have you ever gone to see a movie while you were in a bad mood, but by the time the movie was over, it was so good that you came out feeling great? That is one of the magical elements a movie possesses. However, that magic swings both ways, where you can go into a movie feeling perfectly happy and content, but the movie was so bad that you walk out of it pissed off. That is exactly what happened to me over the weekend when I saw the new horror movie “Oculus” which opened only two days ago on April 11.

There is a new subgenre in the world of horror that has been pretty popular over the last five years. It can best be described as the Haunted genre. Basically the movies focus on a haunted insert-noun-here. The thing that is haunted is either a person, place or thing. In the case of “Oculus” it is a haunted mirror. A brother and sister, Kaylie and Tim Russell (Karen Gillan and Brenton Thwaites) are determined to take on this supernatural object after it took the lives of their parents when they were kids.

In 2004 “Saw” started the “Torture Porn” subgenre and it was successful for many years until it was too played out and it no longer shocked audiences. The Haunted Whatever genre is now in danger of doing the same and “Oculus” can be the movie that officially starts it down this path. One of the big issues this genre has it that they all end in a similar fashion. What was once considered a “surprising” ending is anything but these days. In this movie’s case, you almost know from the start exactly how it is going to end. If the movie did not end that way, then it would have been a surprise. 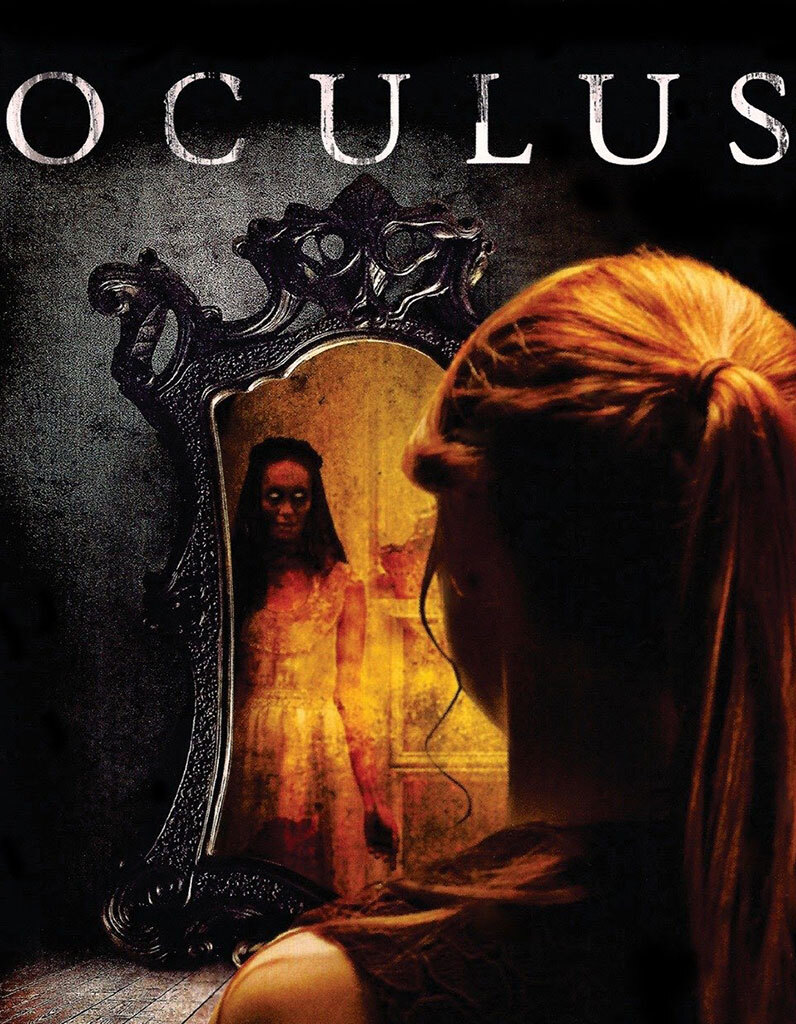 You may say that because I am a critic and have a background in film then maybe only a select few like myself can predict the ending. However, if you have been paying attention to how these movies are plotted out, anyone can see how it will end. I attended a late night screening in Boca and a quick survey of those around all knew how it was going to end too, so it is not just the “experts” who can see this ending coming.

Since you know where this movie is going, it fails to really scare you too with a few surprise scare moments. The movie gets to be repetitive and boring. I yawned out loud a few times and each time I did, the audience laughed because they were feeling the same way. “Oculus” was written and directed by Mike Flanagan and it is based on a short film he made. You can see how the concept could work as a short film, but when fleshed out to be a feature length, the writer/director finds himself out of his element.

The only positive note that can be said about “Oculus” is the acting. Both Karen Gillan and Brenton Thwaites do good jobs in their roles, but the two kids who play their younger selves, Annalise Basso and Garrett Ryan are spectacular. Their roles would be emotionally exhausting for any adult to play and these two young actors were completely up to the task to what they’re roles demanded. These two can have a very long future in this business.

The tag line for this movie is “You see what it wants you to see.” It would not be surprising if the movie confuses a lot of people who sees it. Kaylie and Tim are unsure what is real and what is not, so we don’t know either. The story in the present is interwoven with what happened to the two when they were kids all the way to the end. Sometimes the adult versions of the two almost interact with their younger selves. Are they actually watching their younger selves or are they just remembering? Perhaps, it’s neither and it’s just the editing style that was chosen to tell the story. “Oculus” is not confusing, it’s just trying to be cleaver. It’s not.

Horror movies are not known for having the brightest characters walking around on two feet. We all want to yell at the screen for a character not to investigate that noise they heard and we all slap our heads when someone is running away from a killer by running upstairs. The characters in “Oculus” and BEYOND dumb! They state they are going to take proper precautions, but then their actions make you go, “Huh? Really?!” It’s hard to get into a movie when one side always has the upper hand and the other set of characters never are given a fighting chance at all. How can you root for them that way?

There is almost nothing worse than a horror movie that fails to scare. Even the ghosts in this movie are not that scary, just people with head light eyes. There did not appear to be a lot of effort going into the design of them. “Oculus” could have worked if the script didn’t go by a paint by numbers plot points other films have already done and had a director that was not overly influenced by those movies too. Thankfully, it is very rare a movie can actually make me mad that I saw it, but it is so rotten when it does occur. It is rated R for terror, violence, some disturbing images and brief language.