“An action packed thrill ride that never lets you go!”  “Exciting!”  “The best movie of the series!”  “You’ll be at the edge of your seat from start to finish!”  These cliché, generic quotes are often seen advertising an action movie franchise.  Sometimes they are taken from a newspaper source you have never even heard of.  However, in the case of “Mission: Impossible – Ghost Protocol” every one of them and more are right on the mark.

In this outing, Ethan Hunt (Cruise) and his other IMF operatives, Jane (Paula Patton) and Benji (Simon Pegg) are declared to be terrorists after a mission they were on coincided with an attack on the Kremlin.  Without having any backup at their disposal, Hunt and his team set out to clear their names while at the same time prevent the real terrorist from carrying out a potential devastating attack. 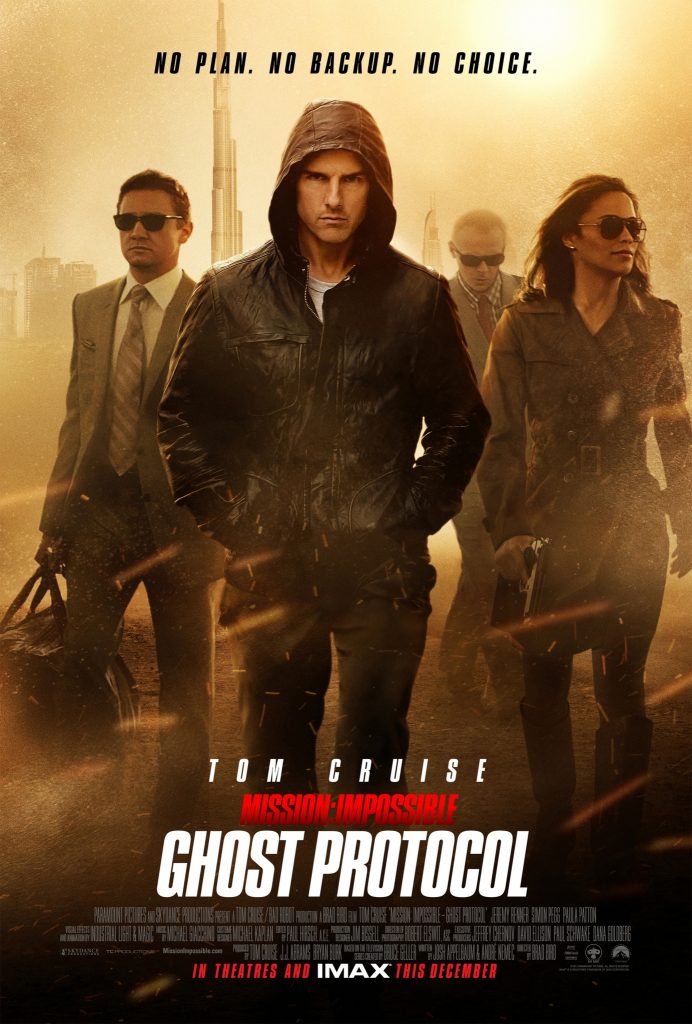 “Mission: Impossible – Ghost Protocol” was directed by Brad Bird.  After directing such hits for Pixar like “The Incredibles”, Bird proves he can do just as great of a job working in “the real world”.  The movie had a great flow throughout, which is something that often gets overlooked in these kinds of movies.  Many times, when there is no action going on, you are just waiting around for the next action sequence to start; but, in this movie, Bird maintains a great pace by adding some character depth and story development in-between the action scenes.

Another aspect of action movies that is not often discussed, but it should be, is the musical score of the movie.  The truth is a musical score can often be critical to a movie, regardless of the genre.  In this case, Michael Giacchino did an excellent job creating the score to “Mission: Impossible – Ghost Protocol”.  The music he wrote for this movie helps bring out the intensity of the movie and really helps draw the audience into the action.

While there is no Oscar-worthy performance going on in this movie, everyone involved does their jobs well.  Ethan Hunt is the only character Tom Cruise has ever reprised in his entire career on screen and he slips into the role as a well worn and comfortable suit.  Newcomers to the series, Paula Patton and Jeremy Renner gives the series the shot in the arm it has sorely needed for a long time and Simon Pegg provides some great laughs, although the other cast members have their humorous moments too.

One staple of the Mission: Impossible movies is the new high tech gadgets the characters interact with, some amazing looking cars and, of course, intense action sequences.  “Mission: Impossible – Ghost Protocol” does not disappoint. There are some real fun gadgets in this movie, an amazing looking BMW and great jaw dropping action scenes.  Who would ever conceive a chase scene during a sand storm?  Great stuff.

For right now, “Mission: Impossible – Ghost Protocol” can only been seen on IMAX screens across the country.  Even when it opens in regular theaters next week, IMAX is the way to go because the filmmakers shot almost 25-minutes of the movie using IMAX cameras.  For those who do not know what the big difference is between shooting with regular cameras and an IMAX one, you’ll know after seeing this movie.  There is one sequence where Ethan must scale the largest building in the world, located in Dubai, and don’t be surprised if you get the feeling of vertigo when you watch it.  It’s THAT intense!  The helicopter shots are worth the extra cash you have to pay for an IMAX ticket.  It is the best way to see this movie.

If you are looking to see a great action movie this holiday season, look no further than, “Mission: Impossible – Ghost Protocol”.  You’ll get everything you’re asking for and more if you see it in IMAX.  It is rated PG-13 for intense sequences of action and violence.