Guardians Of The Galaxy

Have you ever found yourself clapping at the end of a movie? If not, you have likely heard others do so. You may have felt a little silly since you did not just see a live performance, but the movie was so good you just gave in to the compulsion to clap. You don’t hearing booing too often, even if the movie was bad. However, that is exactly what you would have heard if you attended the advanced screening of “Guardians of the Galaxy” earlier this week in Delray Beach. It is one of the most highly anticipated movies of the summer and now today, August 1, it is finally here.

“Guardians of the Galaxy” is the next big risk from Marvel Studios. Not only is it a lesser known comic book, but it barely intersects with the current Marvel Universe that has been established. The movie centers on five inter-stellar criminals, Earthling Peter Quill, who prefers to be called Star Lord (Chris Pratt), the assassin Gamora (Zoe Saldana), Drax the Destroyer (Dave Bautista), Rocket the Raccoon (Bradley Cooper) and Groot (Vin Diesel). These unlikely comrades must work together to prevent the universe from being destroyed.

When two of your main characters are a Raccoon and a talking tree (Groot), you are seeing a very odd movie. One you would imagine to have plenty of laughs and “Guardians of the Galaxy” has that in abundance. You probably will not find it in the comedy section when it comes available to rent later this year, but it would not be misplaced if you did find it there. There are some moments in this movie you may miss because you are laughing so darn hard at something that just happened. The movie contains great laughs from beginning to end. 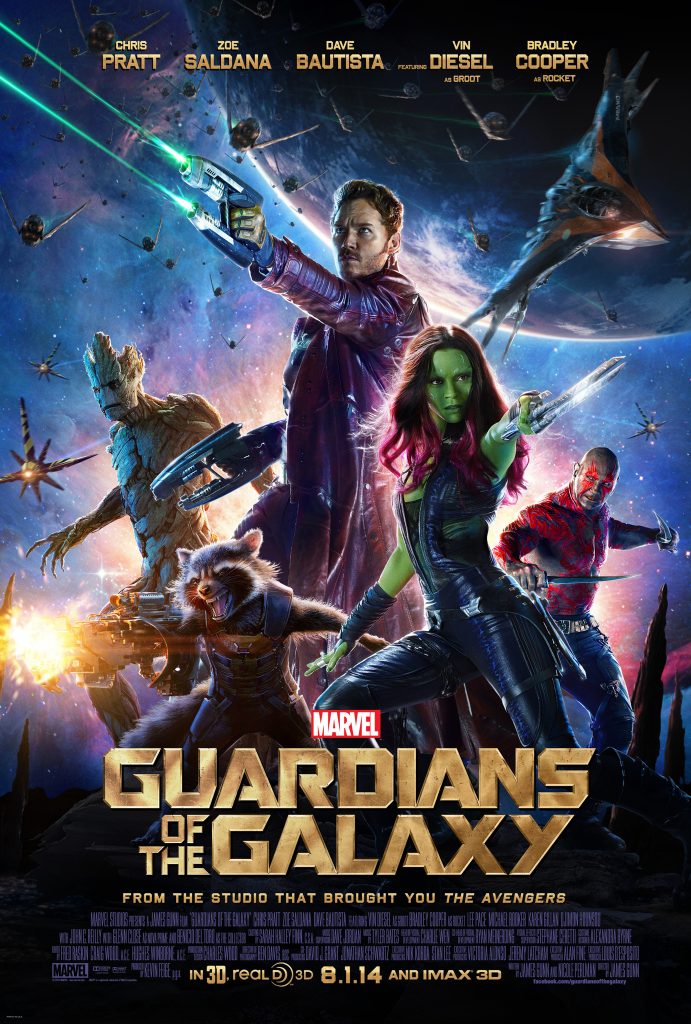 Odd as this may sound, but one problem with “Guardians of the Galaxy” is that it played too much like it was from a comic book. Other Marvel movies, like “Captain America: The Winter Soldier” could be viewed as an excellent espionage thriller that just has superheroes in it. The world writer/director James Gunn is very colorful, that includes the sets, the costumes and the aliens. The movie gets cheesy on more than one occasion and with the exception of the climax, the action scenes don’t ever appear to reach their full potential. This is by far the biggest movie James Gunn has ever directed, and despite never finding much success as a feature length movie director, he did deserve the shot based on his past numerous writing credits. Unfortunately, the movie may have been served better under someone who has done more work with this type of genre.

Now lets revisit on why there was so much booing at the advanced screening. Most of us know how Marvel always puts a little something extra after all the end credits. Sometimes it may be a small preview of an upcoming Marvel movie or just something added on to the one just seen. When the end credits finished rolling at the advanced screening it showed nothing! Given how long everyone waited, it was no surprise that boos followed. Here’s the kicker, if you do elect to sit through the end credits of “Guardians of the Galaxy” there is a little extra footage. It’s one last gag James Gunn threw in, but you will only get the joke if you are pretty well versed in the Marvel Universe.

This is not the first time Disney decided not to include bonus footage at an advanced screening. They pulled the same stunt a few years ago with “Captain America: The First Avenger.” The question is why do they do that? The people at these screenings may tell their friends not to sit through the end credits because they are under the belief that there is no bonus footage. These advanced screenings take place to help get good word-of-mouth out, so why would Disney let the final word on their movie be something negative? It’s something we’ll probably never get an answer to since they do show the extra footage at other screenings. Hopefully, the “boo” reports will get back to the executives and they will not make such decisions in the future.

Another surprise about “Guardians of the Galaxy” is the 3D effects in the movie. The Marvel movies Disney produces are all shot in 2D and converted to 3D in Post-Production with usually less than stellar results. Not the case here. The 3D is better than decent, it’s great looking, especially during the space battle sequences. This is one Marvel movie where it is a good idea to spend the extra money to see it in 3D.

The musical score also falls under the cheesy category, but “Guardians of the Galaxy” features a great soundtrack. Peter Quill has a mix tape with him that is comprised of some of the coolest songs from the 1970s and 80s. When those songs accompany the action happening on screen, the movie plays a lot better than when Tyler Bates score is playing.

All the acting in the movie is good. It’s hard to imagine anyone else playing any of these roles. Chris Pratt is slowing beginning his climb to the A-List. Zoe Saldana has found herself another huge movie franchise. Bradley Cooper is so good as the voice of Rocket you would think he turned himself into that talking Raccoon and Vin Diesel can do so much with only one line to say throughout the entire movie. Rocket and Groot have a pretty great Han Solo/ Chewbacca relationship.

“Guardians of the Galaxy” is probably the last really huge summer movie of 2014 people were looking forward to seeing. It is not the disappointment that many other movies were this past summer, but it does not fully meet the expectations of it either. Still, the laughs it provide is a good enough reason to go out and see it for enjoyable time. After all, basically, that’s all we can ask from a movie. It is rated PG-13 for intense sequences of sci-fi violence and action, and some language.