Get Him to the Greek

“Get Him to the Greek” falls into a very unique category in the world of movies; it is not an original film, and it is not a sequel or a remake.  This movie is actually a spin-off from another movie, something more often found in the world of television.  The movie in question is the successful comedy “Forgetting Sarah Marshall” from 2008.  The movie was written by Jason Segal and directed by Nicholas Stoller.

Nicholas Stoller takes over the writing duties for this movie and directs once again.  The film revolves around the character Aldous Snow (Russell Brand), the lead singer of the British rock band, Infant Sorrow.  At one point in that movie, while the Peter and Aldous are on surfboards, despite that this is the man who the love of his life left him for, Peter says to Aldous, “Man, you’re cool.”  He was a very likable character, with a lot of depth too.  He even helps save a marriage of a young couple honeymooning in Hawaii. 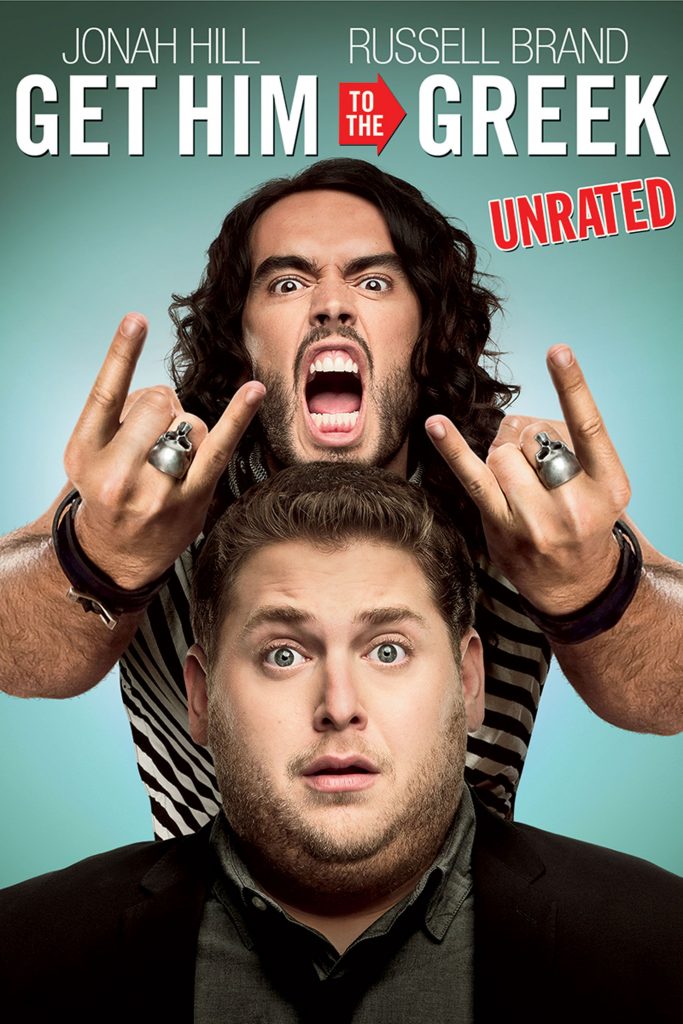 In “Get Him to the Greek” Aldous is not as likable anymore.  His career has taken a downward spiral since we last saw him.  Fortunately, Aaron Green, portrayed by Jonah Hill who was also in “Forgetting Sarah Marshall”, but not as the same character, is one of his biggest fans and works for a record company owned by Sergio (Sean Combs).  Aaron has the idea of having an anniversary show at the Greek Theater in Los Angeles where Snow’s band put on a legendary show ten years prior.  Sergio sends Aaron to London to get Aldous, who must get him to LA in three days time.  The problem is that Aldous now drinks and takes drugs and is more than a handful for Aaron to handle.

So hilarity ensues, right?  Wrong.  The movie provides some laughs, but who wants to plop down $10 a movie ticket for some laughs?  To start, Aldous is no longer the cool character that helped get him his own movie in the first place.  Maybe Stoller thought it would be a good idea to change the character to make him “grow”.  That’s commendable; but, that doesn’t mean you have to make the character unlikable.  So his career is not what it used to be, and I should care because….?  Oh, you don’t want to answer that.

Another problem is that the film sets out to be a classic buddy picture.  Two characters, who are complete opposites, come together for an adventure and somehow persevere and become close friends.  In order for that to work, the two actors need to have some great chemistry on the screen and Hill and Brand have absolutely none.  The two have some funny moments in the film, but they achieve those moments on their own, with no thanks to the other.  Acting is about feeding off the actor performing across from you, and in this film the two stars practically starve to death.

Movies where the comedy stems from gross-out jokes, sex jokes, drug related humor, or where f-bombs are dropped every other second can be really funny in some films, but in this one they almost all fall short.  At The Cobb Theater in Palm beach Gardens, for an advanced screening of the film, one audience member went as far to describe the humor as “depraved.”

This past Memorial Day Weekend the box office total hit a 17 year low.  Movies such as “Get Him to the Greek”, while may play well with the teenaged crowd, will not help it bounce back anytime soon.  It is rated-R for language, sexual content, nudity, violence, and drug use and alcohol consumption.