Will Smith’s “I Am Legend” came out in 2007. It was about the last man on Earth living in New York City. In one scene, when Smith’s character was fueling up his car a poster for a Batman/Superman movie can be seen. Was this a sign that said when these two iconic comic book heroes finally grace the screen with one another the apocalypse would not be far behind? If so then mark today, March 25, 2016 because “Batman v Superman: Dawn of Justice” is upon us. Maybe if the movie is good everything will be okay, but if it’s bad, then we should get ready for the end. So maybe we should all begin to get our affairs in order.

There was an advanced screening of “Batman v Superman: Dawn of Justice” Tuesday night in West Palm Beach. Before the movie started director Zack Snyder appeared on the screen asking everyone to enjoy the movie, but not to reveal any spoilers for their friends. This review will abide by that request outside of aspects that are considered “common knowledge” about it (i.e. Wonder Woman, Gal Gadot, is in it). 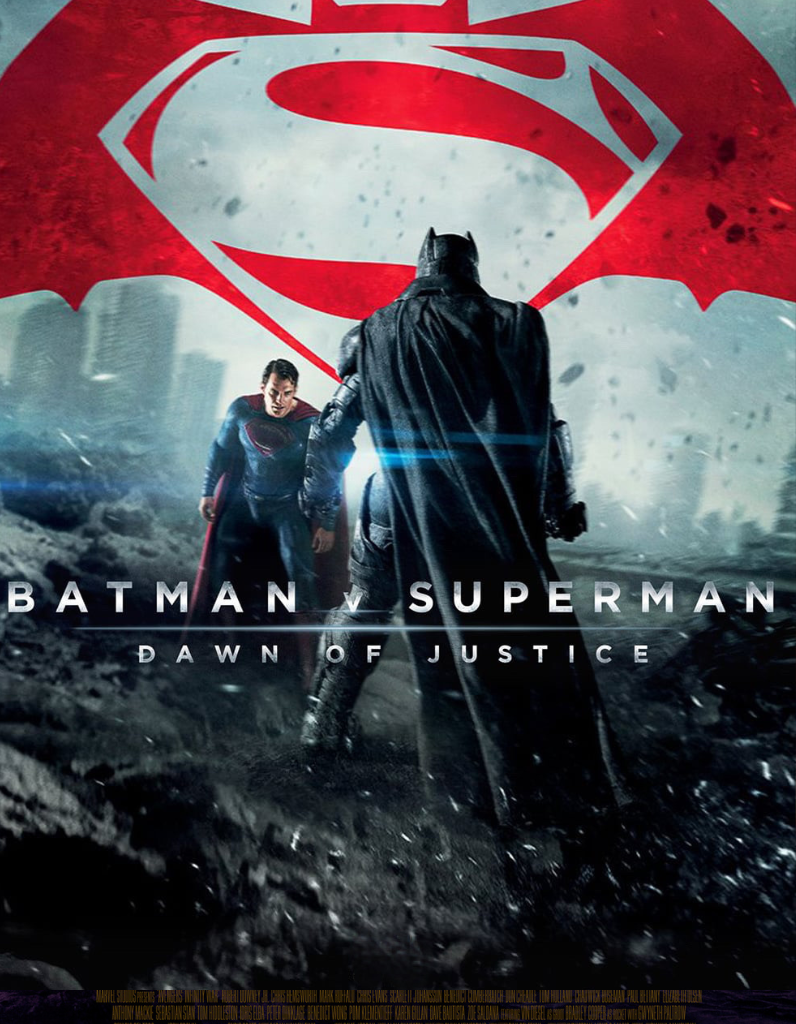 Superman (Henry Cavill) is now an established hero, depending on who you ask. Yes he saved the city of Metropolis, but at what cost. The people are still reeling from the massive damaged that was done and all the lives that were lost or destroyed along with it. One such person is Bruce Wayne (Ben Affleck) who lost many friends that worked in his building during the battle between the Man of Steel and general Zod. Bruce Wayne is also Batman, who firmly believes the world can’t trust an alien being with that much power.

Before we dive right in with all the failings of “Batman v Superman: Dawn of Justice” let’s touch on one topic that is not an issue, Ben Affleck playing Batman. When the news first broke that Affleck was playing Batman, the fan reaction was extremely negative. How much so? A petition was submitted to the White House asking to make the casting illegal. That’s how ridiculous the backlash got. Whether you like or hate this movie, it shouldn’t have anything to do with Ben Affleck being the Dark Knight. Fans should be very pleased with his performance.

You want a movie like “Batman v Superman: Dawn of Justice” to grab you right away. Fans have been waiting for this movie for their entire lives and now it’s here, so you want it to start off right. Instead, we get an opening fans have seen multiple times already. It’s a let down. The last way you wanted it to begin. So the movie is in a hole before five minutes have even passed.

Christopher Nolan is one of the produces on “Batman v Superman: Dawn of Justice” as he was with “Man of Steel,” where he is also credited for coming up with the story.” It was understandable DC wanting to turn to him after he successfully turned around the Batman franchise with his Dark Knight trilogy.

Nolan’s Batman movies were certainly darker than what fans were used to, but they were more in tune with the comic book. “Man of Steel” was also a darker take, but not exactly a dark, bleak film and that’s exactly what we have here with this newest entry that allows the two superheroes to share the screen. Except for one, very brief moment, there is no levity in “Batman v Superman: Dawn of Justice” at all. As one other critic pointed out at the early screening, the movie is heartless, gutless and soulless. All three adjectives accurately describe this movie. Oddly too, while Christopher Nolan is a producer, this movie’s Batman has more in common with Tim Burton’s Batman than Nolan’s.

Maybe the additional writer and music composer had something to do with it. David S. Goyer returns as one of the screenwriters, but this time he was teamed with Oscar winning screenwriter, Chris Terrio. If you don’t remember, Terrio won the Best Adapted Screenplay Oscar for “Argo” which was most deserving. The man is a great writer, no doubt there, but maybe he was the wrong choice to bring on this project. A comic book movie is a far cry from what he has previously written. Nothing happens for a long time in this movie, it’s mostly about the setup which takes way too long and while “Man of Steel” let you connect with the characters, that doesn’t happen this time around. Not with Superman and certainly not with Batman. Jessie Eisenberg’s Lex Luthor goes a little over the top at times, but we never fully understand his motivation behind his madness. It would be real interesting to learn why Goyer couldn’t be trusted with sole screenwriting responsibilities this time out.

It appears he was not the only one who wasn’t trusted to do their job alone again, Hans Zimmer is doing the music for “Batman v Superman: Dawn of Justice,” but this time he is joined by Junkie XL. Zimmer did a great job with “Man of Steel” and gave Superman a fantastic new theme. There’s almost no trace of that soundtrack on this movie. The story replies on a heavy bass, low toned violins and piano and loud beating drums, everything that never lets you forget that you are watching a dark movie. The music really pounds it in your head of what kind of movie you are watching.

The movie can be seen in IMAX theaters or in 3D. The early screening was shown in the IMAX format, but not in 3D. Whether the post-production 3D conversion is well done or not, it’s hard to imagine getting anything extra from seeing the movie in that format, so save your money there. Some IMAX theaters are showing a 2D 70mm print and since some scenes were shot using IMAX cameras, in that case, you’ll get your money’s worth.

“Batman v Superman: Dawn of Justice” should see a nice box office return, at least for opening weekend. The question everyone wants to see answered is how the big climatic fight turns out. Again, there will be no spoilers here, but some will be satisfied with what they see, others will not. There’s some good stuff in there and there’s some eye rolling moments too. It’s funny though, as much as everyone has been waiting for this big match up to occur, the only time the audience at West Palm Beach broke out in applause is when Wonder Woman first appeared on screen. Perhaps that is a telling sign, or at least one that predicts the Wonder Woman movie should do well when it comes out next year.

Perry White (Laurence Fishburne) has a line in “Batman v Superman: Dawn of Justice” that goes, “Nobody cares about Clark Kent taking on the Batman.” It’s kind of funny because that’s what we’re all here to see. It’s just too bad it couldn’t be better. The movie does have it’s fans and while most critics have seriously panned the movie, those fans have dubbed those who did not like it as “Haters.” Nothing can be further from that description. Many of us went into this movie dying to love it! The “Dawn of Justice” subtitle of this movie comes from the fact that a Justice League movie is now on the horizon, much like how Marvel did the Avengers. However, DC needs to right it’s ship and fast. It is rated PG-13 for intense sequences of violence and action throughout, and some sensuality.