To have a music career almost span 40 years is a major accomplishment, no matter who you are. To do that when many have seen you no more than a “novelty act” is beyond something special. However, that is exactly what “Weird Al” Yankovic has done. He had his first hit in 1979 with the release of his song, “My Bologna” a parody of “My Sharona” by The Knack.

Four Grammys and a #1 album later, “Weird Al” Yankovic is more popular than he has ever been, outlasting longer than many of the artists he has parodied. He is hitting the road this summer, re-kicking off his Mandatory Tour, after doing five months last year. He began last week, doing three shows throughout the state of Florida (Saint Petersburg, West Palm Beach and Fort Myers). He’s returning to the sunshine state this weekend, beginning tonight, June 10 in Miami before heading to Saint Augustine tomorrow night and wrapping up the weekend in Birmingham, Alabama.

“Weird Al” Yankovic is a busy man these days, but he still had time to do a phone interview with me. Being a fan of his for over three decades, it was a great thrill to speak to him. I found him amazingly gracious and humble and we had a lot of fun and laughs during our time together. 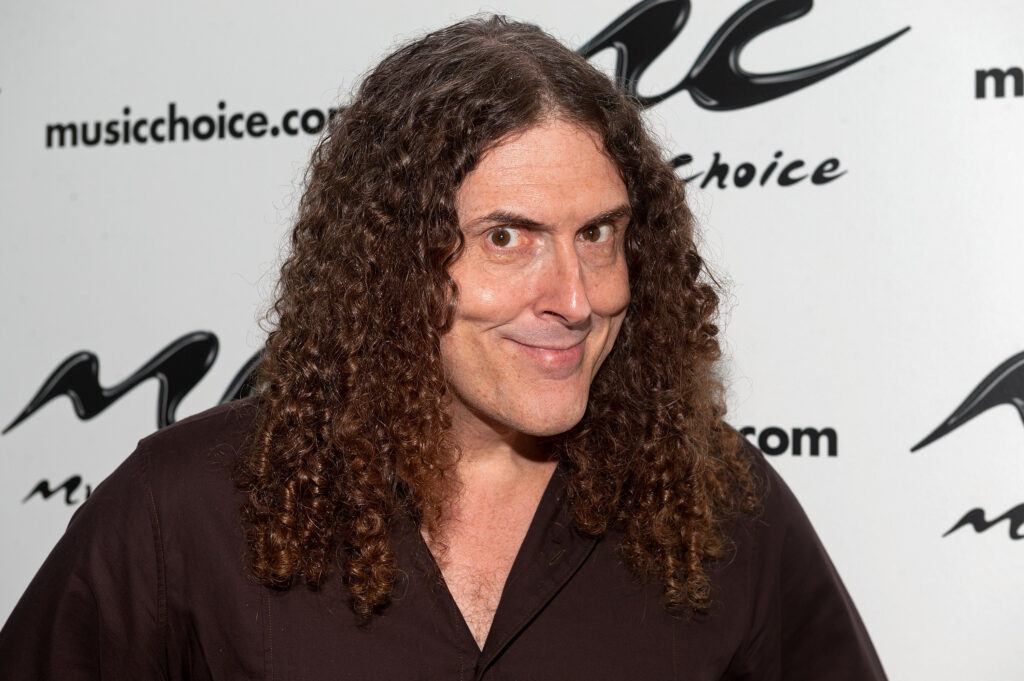 I’ve been a fan of yours for well over 30 years, but my first live concert wasn’t until the Poodle Hat tour in Westbury, NY. One song you sang that night was “Melanie.” Aside from the staples, when you are planning a tour how do you decide what songs to include and which ones not? It’s always a bit of a puzzle because obviously I only have a finite amount of time on stage and I want to feature a lot songs from whatever the current album is. I also want to play pretty much all of my hits and fan favorites and I also want to throw in a few maybe deeper cuts, like “Melanie” for the hardcore fans that maybe weren’t expecting to hear that live in concert. So I always try to make it a new blend of those three things. Do the hits, do the new stuff and do a few surprises.

Before I saw “Birdman or (The Unexpected Virtue of Ignorance)” at the end of 2014, many of us the music video to “Tacky” which is presented as one long take, like that movie. Was that one of your biggest challenges as a director? It was a challenge, but it wasn’t the most complex video I’ve ever done. It was probably the biggest challenge for a Director of Photography because he had to walk backwards through a five story building with a camera and always keep the protagonist in view and not be jerky. That was probably more of a challenge for him. That was the most fun video I ever got to do because I got to work with amazing people like Jack Black, Kristen Schaal, Aisha Tyler, Eric Stonestreet, Margaret Cho, and they were so professional and on their marks. I think we did six takes of it. Three or four of which were usable and we just used the last take. It was so fun I kind of wished it took us longer to shoot it because it was such a blast.

You open the show with that song too and you present it in the same manner, as one long take as you are either somewhere in the bowels of the theater or outside, but sometimes you are at four different venues, four nights in a row. How do you get that planned out so well in so little time? Well I work with my Lighting Director who maps out the route that I’m taking. He figures out how long the “cord” needs to be to get me from Spot A to Spot B in X amount of time. So there’s a little bit of math that goes into it. Sometimes I rehearse the walk before a show and sometimes it’s a surprise for me. I’m just following the camera the whole time and hope I’m being led to the stage.

It’s good to have trust. Yes.

Now that your album contract is up, fans are wondering what you will do after this tour. Many are clamoring for a new Weird Al movie. If that were to happen, I’d imagine you’d direct it. I’m going to change this question up a bit, you have directed other musician’s music videos, what are your thoughts of directing a feature length comedy that was NOT a Weird Al movie? I would certainly be open to that. I mean, no major studios have been banging down my door asking for me to make that a reality, but if I got the right offer, yeah, I’d probably jump at that. That sounds like it would be a welcomed challenge.

Speaking of movies, and of course, there’s “UHF” and there is something I’d really like to share with you. Many years ago, Kevin McCarthy was down here for the Fort Lauderdale International Film Festival and I got to interview him. This was less than a year before he died and he wasn’t in the best of shape then. He was confined to a wheelchair and at one point in my interview he had forgotten where he was. However, right after was when I asked him to share his thoughts working with you on UHF and Al, the man sat up in his chair and really lit up and simply said, “That was a good one. He was funny. I was funny. WE were funny. And it turned out to be a funny movie.” (Al laughs) Oh, I love Kevin. He’s just the sweetest man in the world. That really made me happy to hear you say that. He was just the best. I went to his memorial after his passing. There was all this “UHF” memorabilia there. The people that were close to him made a point of telling me how much he loved being in that movie, which just meant the world to me.

There’s talk of a Creed 2, possibly coming out in 2017, which would be the equivalent of Rocky VIII. That means a song you put out in 1984 may have predicted the future 33 years beforehand. So since we have discovered you have that power, can you please give me some Powerball numbers to use in 2049? Sure, 27-14-3-6-18 and Powerball 7.

I’m going to take one quick serious turn for a moment. A number of entertainers who were scheduled to do shows in North Carolina have canceled those dates after the state passed it’s controversial HB2 bill. You put on your Facebook page earlier this week that you have decided to honor those dates and the response overwhelmingly positive. I, too, very much back your decision. Can you share what was behind on making that decision and, for those who don’t have access to your Facebook page, what you will be doing with your personal fee for that show in Greensboro on June 18? Yeah, it was a tough call because a lot of people were canceling their shows there and I hate to cancel shows because I’m a real, “The show must go on” kind of guy (INTERVIEWER’S NOTE: “Weird Al” Yankovic lost both his parents in 2004 due to an accidental carbon monoxide poisoning from their fireplace. Al was on tour at the time, but did not cancel any shows). It was a hard decision. Ultimately, after talking to a lot of people I basically came to the decision that I was going to honor my contractual agreement with the promoters in North Carolina, I was going to play the shows. I didn’t want to punish my fans. That was first and foremost, I didn’t want to disappoint the fans. I feel that most of my fans probably agree with me, that’s an unfair and discriminatory law. I decided to donate my personal proceeds from the Greensboro show to the Human Rights Campaign. My manager, we all donated our fees. I just felt like it was the right thing to do. I thought I’d get a little push back from it and I did, but I think the overwhelming response from the fans have been positive.

It has been. Two big Weird Al events took place last week on June 3. The Mandatory Tour kicked off again in St. Petersburg and “Comedy Bang! Bang!” had its new season premiere on IFC. How did you first end up on the show and how did you wind up as bandleader this season? I’ve been a fan of the show for a long time and I’ve been friends with Scott Aukerman for a long time. The timing just worked out. Kid Cudi determined that he wouldn’t be able to continue with the show because of his touring commitments and Scott sent me an email the day after my five month tour wound up last year asking me if I’d be the bandleader. It’s not often that I get ask to be the co-star of one of my all time favorite shows, so I immediately said, “Yes.” I’ve had a great time working on the show this season.

At the end of the concert, you give credit to all the members of your band, Jon “Bermuda” Schwartz, Jim West and Steve Jay, who have been with you since the beginning of your career, I might add. Ruben Vaitierra too. I would like to get credit to one more person involved with the show, if you’d like. He’s an elderly gentlemen with a beard. He plays many parts throughout the show, some titles include harmonica holder and cape draper. Who is this person? His nickname is Hawkeye, but his given name is Richard Henriksen. He’s our Stage Manager. He’s been with us for a very long time. He’s worked with a lot of people in his life. He’s worked for Prince, oddly enough (INTERVIEWER’S NOTE: Prince is one of the few artists who never gave AL permission to parody one of his songs). He’s been part of our organization, off and on, for decades at this point. He’ a wonderful guy. He does great work and he doesn’t mind being the butt of jokes.

Al, what do you love most about performing live? Well, just the interaction with the fans. That’s the only part of my job where I get that kind of immediate gratification. I mean, I love doing recordings and the videos, and TV, movie appearances, but you don’t have thousands of people screaming in your face (laughs) while you’re doing that actually. So that sets the adrenaline. It’s the thrill of having people reacting to what you are doing on stage.

Okay, last question, Al, why is it MANDATORY people attend this tour? It’s right in the name. I mean, you can’t argue with that. The reason that we’re doing it again this year because I think a lot of people just weren’t familiar with the definition. It means you HAVE to go! There’s no choice in the matter. You must attend. It’s MANDATORY!

Merriam-Webster dictionary defines Mandatory as, required by law or rule. You can click HERE to purchase your tickets to see “Weird Al” Yankovic on his Mandatory Tour. Required or not, it will be one of the best times you have this summer.